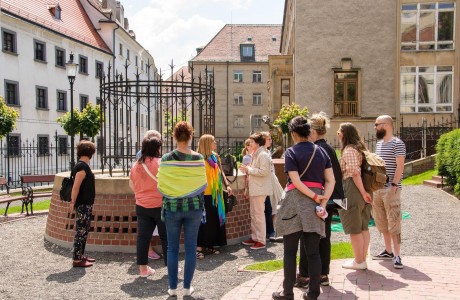 There were several medieval monasteries in Bratislava. For example monasteries of Cistercians, Franciscans, Poor Clares and Antonites. Next to the monasteries, there used to be utility gardens. Franciscan and Poor Clares monasteries had also ornamental gardens. These gardens were making something like a centre or “heart“ of the monastery. However, almost no pictorial and written materials about the appearance of these gardens from the early Middle Ages have been preserved.

After 1291 AD a gothic city was built. It was surrouned by town walls. The Middle ages was a period of various fights, battles and riots. This is the reason why town walls were built. The purpose of the wals was to protect town from possible enemy attacks. The walls had to be strong and resistant,  so it often happened that the interiors behind the walls were small and cramped. All these aspects influenced building of gardens in that period.

Medieval townspeople prefered utilitarian gardens rather than romantic ones. That’s why they used to build vegetable gardens, orchards and vineyards. On a large scale, people began to build gardens in the suburbs so larger green spaces were created.

Monks in the past, as well as nowdays were inteligent and educated people. They influenced social, spiritual and cultural part of a life significantly. Life of a monk was divided into two parts – praying and working. Monks could do physical activity as a help in the kitchen, in the workshop, in caring for the sick and weak people, on a field and in the garden. They growed mostly herbs and plants that were useful to them. Herbs were used to produce various ointments and tea. These products helped monks with a treatment of the sick people. Since monks knew how to write and they understand medicine, they were creating herbariums and writing medical books. Thanks to the monks, Bible and other historical books have been preserved till simultaneity.

The name of this garden tells us that the garden belonged to the Franciscan order, whose history in Bratislava dates back to the middle of the 13th century. Franciscan monastery garden is one of the oldest historical gardens in Bratislava.

In the Baroque period, the garden was rebuilt from the original rectangular garden to the Baroque one. According to Ján Matej Korabinský (Johann Mathias Korabinszky), the garden was famous for its beautiful landscaping with a fountain and fresh mountain water.

In 1708, plumbing has been introduced into monastery as well as into inner garden (paradise yard). (Paradise yard used to be composed of four paths that were to symbolize four rivers flowing into paradise. All four paths led to the fountain, which was located in the centre of the yard. Around the paradise yard there was an cloister - a corridor with windows allowing views on the garden from different angles.

In 1723 the garden was reconstructed. One year later priest Matej Mak had a painting of the Calvary painted on the wall of the garden. In 1896 the Bratislava Decoration Association cooperating with the City Council, decided to remove the remains of the wall surrounding the garden and replace them with a decorative iron fence. The garden thus gained a completely new style and atmosphere.

From a dendrological point of view, composition of woody plants is relatively simple. Norway maples are planted around the perimeter. There are also English yews, abelmosks, meadowsweets and small-leaved linden.

In the recent history, due to the increased amount of motor vehicles in the city center, it was necessary to build parking spaces and therefore an underground garage was created under this garden. The garden has been locked and inaccessible to the public for a long time. But thanks to the agreement with owner it was opened in 2010 again. It was opened from 1 of June to 1 of September in order to find out whether there was an interest of public to visit this garden. Later it had been closed again respectively it was accessible from the underground garages. Since 2018, it has been leased by the BA Staré Mesto district from an Austrian private company (which also owns underground garages). BA Staré Mesto district opened it to the public, and it takes care of the garden. In 2018 artworks and installations were added here.

The second part of the garden- Quadrum,  is not normally open to the public.
Current garden and architectural designs are similar to those in the past.

The garden can be found in the historical centre of Bratislava. It is partly located in the pedestrian zone. It is possible to get here by any public transport that goes to the city centre.

Part of the garden that belongs to the administration of the BA Old town district is opened for public as follow:
Monday - Sunday: 9 am–9 pm