The park now houses a (non-) permanent exhibition of outdoor sculpture, which has been under construction since 2001 when the first year of the International Sculpture Symposium was held. 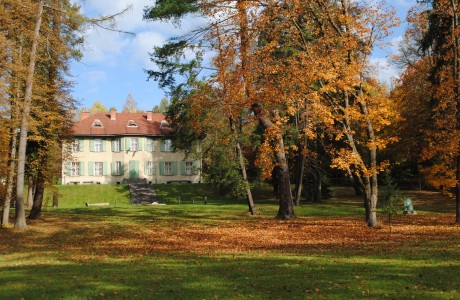 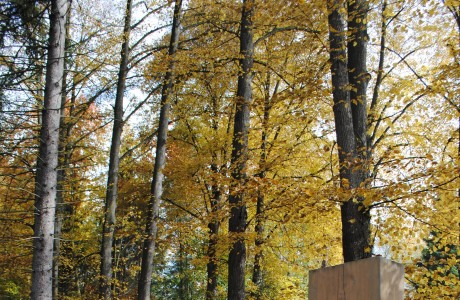 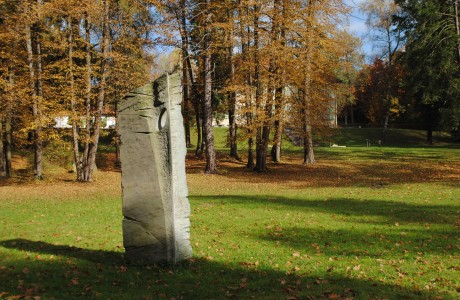 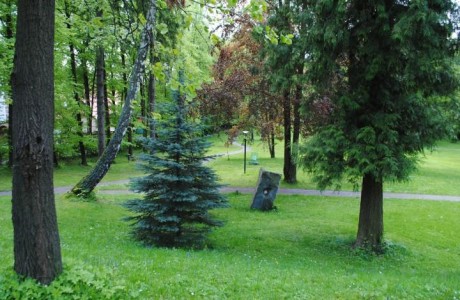 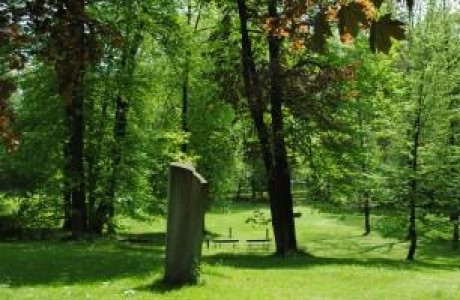 The site where the manor stands today was bought at the beginning of the 20th century by the Prussian junker Count Ballestrem from the original owner Arnolf Popper. The new owner had the manor built as a hunting lodge in 1910-1913 and created a forest park with an area of over 3 ha. The whole area was fenced. The building is two-tract and two-storey, symmetrical on the central axis, oriented longitudinally in the east-west direction.
The park could be accessed by wooden steps from the terrace. In 1918, the manor and the park were taken over by the Joint Stock Company for the Utilisation of Wood, based in Vienna. At this time, only foresters permanently occupied the manor. Under the next owner, Director Oeser /1938-1939/, a coach house with a carriage house and stables for breeding selection horses were added. Before the First World War, a forest administration building was added opposite the park. At that time, a game preserve of about 20 ha was added to the manor house. At that time, the property belonged to the Zelehos company. A water supply from the Kučák’s Forest was introduced to the manor and a small fountain was built in front of it. A mill was set up near the park on the Oščadnica stream. Towards the town there were hop fields for the Čadčany brewery. Wood from the Tichá valley was floated down the stream and processed into charcoal at the inlet to Kysuce. A road ran close to the park, which was lost in a swamp in the event of prolonged rain. The park was separated from the road by a massive poplar avenue stretching all the way to Čadca. It was cut down at the end of the First Czechoslovak Republic. On the marshy meadow south-west of the park there was a forest nursery where poplars and willows were grown. Until 1947, Ing. Petrovský, who is said to have later been the consul in Bolivia and who set up a private picture gallery in the manor, is mentioned as an owner of the manor. Another owner was the Mill Participation Company. After nationalisation, the state forests took over the administration of the forest property and the manor house was managed by Drevina of the Turany National Park. All the buildings were converted into flats. At the beginning of the 1960s, a car camping with a concrete dancing area was established in the lower part of the park.
In 1976 the manor house became the property of the Kysuce Gallery in Čadca.

The mountain park was created by modifying the already existing forest environment, shaping it and supplementing it with new plantings, creating overlooks, improving the peripheral parts and building access roads.

The mayor had a plan drawn up for the road network that was to be built here. The original network of paths has been preserved to this day. Fifty benches were installed in the park, a caretaker's house was built at the main entrance and a playground was also built in 1873. Two wells were used for irrigation. The park area was also beautified by small iron structures - gloriettes, a small pavilion with folded benches or a metal lookout tower on the Murmanská hill. New benches were continuously added to the park. In 1907, for example, the Municipal Beautification Association had round benches made by the Marton company (some of them are still preserved today). In that year, 25 plaques with poems by local poets were also fixed to the trees.  For the protection of animals and birds, 20 bird feeders and bird boxes were erected.

The park was created during the period of an artistic movement called Realism, during which nature-landscaping was promoted in garden art and interest in non-native tree species increased as well. Due to the harsher natural conditions that the Mountain Park has (rugged terrain, different sun exposure, different humidity conditions), the tendency to plant a more diverse range of plants has not been strongly applied and the Mountain Park has retained the character of an older woodland park.

At the end of the 19th century, many new species of trees were planted in the park, such as groups of yew, lime and plane trees, as well as ginkgo and various foreign conifers. Today there are 50 species of introduced trees. From a national point of view, the occurrence of the Golden larch (Pseudolarix amabilis) is significant. Also significant are the massive specimens of trees - many of them reach a height of 30-35 m (ponderosa pine (Pinus ponderosa), beech, sycamore, common ash). The most common of the deciduous trees is horse chestnut. Black walnut is also found here. Among the coniferous species, there are the following: Japanese cedar (Cryptomeria japonica), eastern hemlock (Tsuga canadensis), yew and a group of dawn redwood trees (Metasequoia glyptostroboides). There is also a single specimen of ginkgo.

Today, the park is located in the geographical centre of the city, which has grown in all directions and its area has stabilised at 22.96 hectares. The park is situated at an altitude of between 185 and 260 metres above sea level and is spread over two converging valleys, a mountain spine between them and on terraced plateaux. The natural centre of the park is the Justi’s Monument with its resting terrace.  This monument was erected by the city in 1908 after his death and is the work of the Bratislava sculptor Alojz Rigele, who was also a member of the Bratislava Beautification Society. In front of the entrance to the park from Nekrasova Street there is a monument to the botanist J. A. Bäumler, also by the sculptor Alojz Rigele.

Today, the historic “Horský Park” (Mountain park) mountain hut, which has become a popular place of rest, a meeting place for people and an original cultural centre of Bratislava, also belongs inseparably to the park. It also includes a garden with a children's playground and a libresso with excellent coffee and traditional Bratislava walnut and poppy seed rolls. During summer, various cultural and social events are held here. The hut has been renovated and opened to the public by the Mountain Park Foundation, which is also strongly committed to the protection and meaningful use of the Mountain Park today.

The Mountain Park Gallery is also part of the garden - the only outdoor gallery of contemporary Slovak sculptural art. In 2014, a new nature trail with information boards was added by the Mountain Park Foundation.

Oščadnica can be reached by car, bus and train. The manor is located about 100 m to the left of the roundabout at the beginning of the village.

The forest park is open to the public non-stop